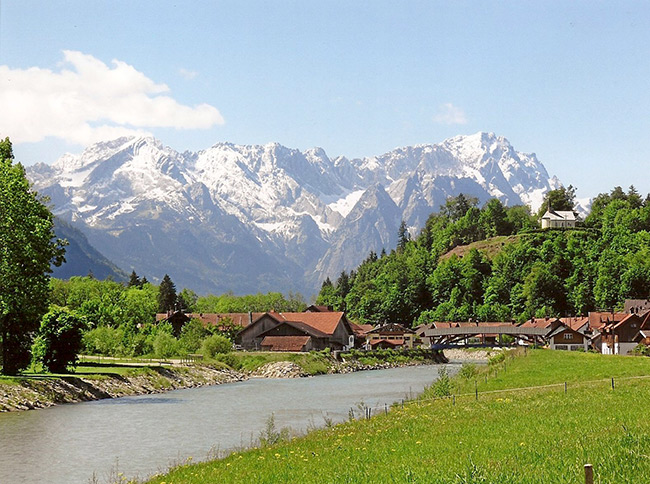 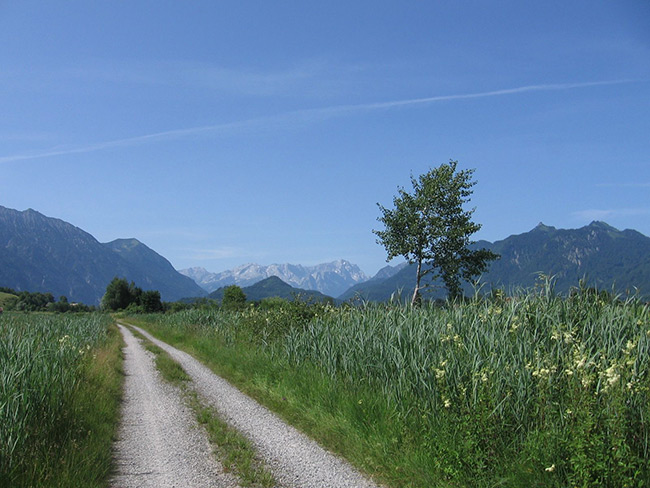 ON THE TRAIL BY BIKE

Get in the saddle and follow one of our theme trails through a breathtaking landscape. On the way, you can enjoy the natural outdoors and simultaneously experience history up close: on the Römerradweg (Romans' Bicycle Route). For those who are planning a longer tour, the bicycle ride from Lake Constance to Murnau and on to the Königsee near Berchtesgaden may be the perfect choice. And for those who prefer to plan at short notice, there is always the bike ride along the banks of the Loisach River. Every one of these routes will enchant you in its own unique way.

Decades ago, historians and scientists explored the Romans' roads. They discovered a part of the Roman infrastructure between Italy and Augsburg that leads from the Brenner Pass to Innsbruck, Mittenwald and Partenkirchen and then continues on to Eschenlohe, Ohlstadt and Murnau.

On the basis of these documents, a bicycle and hiking route of 35 km was developed which leads from the panorama of the high peaks of the Alps to the monuments of history and through Bavarian picture book villages. A Roman coin showing the Christian Roman Emperor, Constantius (337-361 B.C.), was selected as the pictogram for the route. 40 coins indicate the way along the entire round tour. Four information boards at prominent locations provide tips regarding particularly interesting places to stop.

The round tour starts at the first of the four information boards at the Kultur- und Tagungszentrum Murnau / Culture and Convention Centre in Murnau. After passing through the town of Hechendorf, you reach the Murnauer Moos bog where the Romans settled on the Moosberg hill between 260 und 400 B.C. Unfortunately, the ruins of the walls and towers of this fortress fell victim to a stone quarry in the modern era. Today you will find the picturesque lake, Moosbergsee, there. A large information board shows plans and photographs of the excavations.

From here, you ride on through meadows and woods towards the town of Ohlstadt and along the Loisach River to the town of Eschenlohe and the Kalvarienberg (Calvary hill). During World War II, the aerospace manufacturer, Messerschmitt-Bölkow-Blohm (MBB), had storage and production halls here. From here, a cloister leads you to a castle moat and the St. Nicholas Chapel built in 1628 which towers majestically over the Loisach Valley. The ruins remind us of the counts of Eschenlohe, whose estates reached all the way to South Tyrol. At the base of the Kalvarienberg, Roman coins were found at a sulphurous water source in the 19 century.

On their way north, Romans often had to deal with floods, particularly between Eschenlohe and Murnau, which is why they searched for alternative routes at higher altitudes. The flood routes, including the ascent and descent ramps, along the Heuberg and Isenberg Mountains are still visible today. This portion forms the return trip of your historic exploratory bicycle ride. What was once a difficult route for the legions of the Roman army who wore clothing and equipment weighing up to 40 kg and had nothing but primitive transport wagons drawn by horses is an impressive experience for cyclists and hikers today.

A special brochure (currently only available in German) containing useful information on the history of this route and its course was developed specifically for the Römerradweg (Romans' Bicycle Route). The brochure can be downloaded here.

This cycling tour passes through beautiful and varied scenery while following the Loisach River. The mountain stream has its source in the Austrian town of Ehrwald and winds past tall mountain peaks and through pristine forests and meadows. And what is best is that you can enjoy all these sights without having to struggle up steep inclines. In addition to the scenery and exercise, the tour also offers educational titbits: along the clear mountain stream on its way through Tyrol, Austria and Upper Bavaria, you will find numerous boards with information on the history of timber rafting on the Loisach River. You can choose to do the total distance of 100 kilometres as a one-way ride or as a round tour. The tour can always be adapted to your wishes and needs. One way is to take the train. Several of the towns along the route are serviced by train, such as Garmisch-Partenkirchen, Farchant, Oberau, Eschenlohe, Ohlstadt, Murnau a. Staffelsee and Kochel a. See.

When your legs get tired, you can refresh them in the cool mountain water of the Loisach.
Information on the Loisach-Radweg bike route and interesting recreational options is available directly at the Tourist Information Centre of Murnau.

All of the communities along the Loisach River and the Kreisentwicklungsgesellschaft (county development association) of Garmisch-Partenkirchen are working on realising the plan to have uniform signs along the route within Germany.

The bicycle ride from Lake Constance (Bodensee) to the Königssee Lake offers impressive views of the Alps and cultural treasures alongside the route. The tour begins in Lindau on Lake Constance, passes through the Allgäu region, leading to the royal castles of Hohenschwangau and Neuschwanstein, and continues on to Murnau on the Staffelsee Lake.

Here, nature is unspoiled and invites you to linger a while: the Murnauer Moos bog, the three splendid lakes around the artists' town – Staffelsee, Riegsee and Froschhauser See – plus the alpine foothills. The small town in the Blue Land is also very cosmopolitan culturally. This is where the cradle of the Expressionist movement is located: in the Münter House. Wassily Kandinsky and Gabriele Münter were only two of the internationally renowned artists living in Murnau who were associated with the Blue Rider group. Their works of art can be viewed in museums like the Museum of Modern Art in New York or the Hermitage in St. Petersburg, but you will also find important creations in our museum in a castle, the Schloßmuseum. Nature, art and culture invite you to stay a while.

From Murnau, your bike ride to Berchtesgaden on the Königssee Lake takes you to Bad Tölz, Gmund on the Tegernsee Lake and the Schliersee Lake. Next you will pass through the picturesque Chiemgau region with its Bavarian "sea", the Chiemsee Lake, the royal palace of Herrenchiemsee on an island and a backdrop of countless peaks before entering the world of miners, namely Bad Reichenhall. This is where the table salt by the same name is excavated from the depths of the Alps. From here, it is just a few kilometres to your destination, the Königssee Lake. At the end of your long bike excursion, the spire of St. Bartholomä (St. Bartholomew), a word-famous pilgrimage church framed by tall mountains, points towards heaven on the opposite shore.

The route is predominantly car-free from start to finish. Although most of the route is paved, there are occasional sections with gravel or sand. You can find a map and a detailed description of the route along with recreational tips and accommodations (in German and English) at www.bodensee-koenigssee-radweg.de.