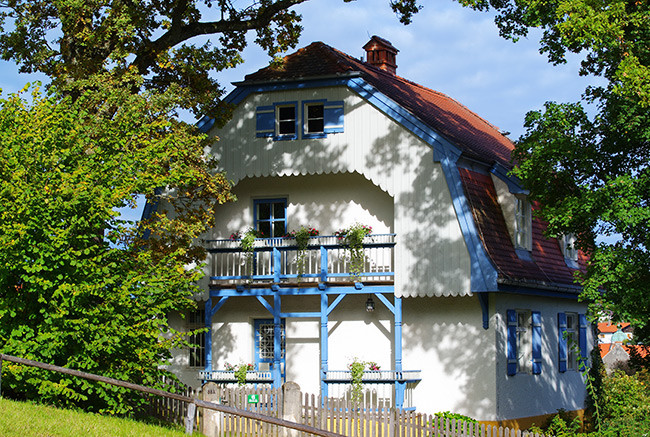 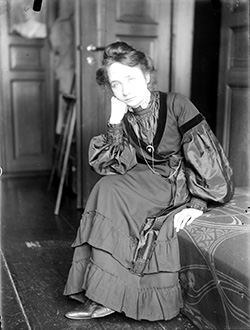 "There [in Murnau], after a short period of agony, I made a giant leap, from depicting nature – more or less in an Impressionist style – to feeling contents, to abstracting, to rendering an abstract."

Many people link Gabriele Münter's name to the genius, Kandinsky, in whose shadow she lived for almost fifteen years – for lack of self-confidence and due to the understanding of the female's role prevailing at that time. Alongside Paula Modersohn-Becker, Gabriele Münter was considered one of the greatest female artists of the German Modern movement after 1900.

Gabriele Münter (1877-1962) lived in Herford and Koblenz as a young girl before she began studying art, first in Düsseldorf and later in Munich. At the Phalanx private school of art in Munich, she met Wassily Kandinsky, with whom she soon developed an intimate relationship. Joint study trips between 1903 and 1908 took Münter and Kandinsky through Europe and even as far as North Africa. Back in Germany, Gabriele Münter spent her summers with fellow Russian painters, Marianne von Werefkin and Alexej Jawlensk, in Murnau, a town on the shores of the Staffelsee Lake. Here, she further developed her art skills, replacing the detailed palette knife technique she had been using with generous brushwork in her scenes of Murnau, among other changes. Kandinsky drew her attention to a house in the Kottmüllerallee tree-lined road in Murnau, which she purchased with money she had inherited in 1909 and, together with Wassily Kandinsky, used as a summer residence. The Russian House, as it was called, became a meeting point for the avant-garde of art.

At the same time, Münter devoted herself to a method of reverse glass painting in a traditional style that is typical of the regional farmers and known as Hinterglasmalerei. The essence of this folk art, namely to reduce art to a simple structure of shapes and colours, influenced the artist and showed her her path to a poignant image statement. World War I ended this artistically productive period and also brought with it the separation from Wassily Kandinsky. She spent a few years in Scandinavia where she waited for Kandinsky's return on neutral territory, and did not return to Germany until 1920. After spending time in Berlin, Munich and the castle Schloss Elmau she moved to Berlin. New Year's Eve of 1928, she met Johannes Eichner. They became close friends. And eventually, Eichner was able to convince her to make a new artistic beginning. Thus, Münter began a second period of work in Murnau in 1931.

After World War II, the artist was honoured as a pioneer of the Moderne movement and an independent representative of Expressionism. She had spent many years fighting for this recognition. Gabriele Münter died in 1962 in the "Russian House" (today's "Münter House") in Murnau at the age of 85. Many of her works of art can be viewed in the Schlossmuseum Murnau, in the Münter House and in the Lenbachhaus municipal museum in Munich.